On the occasion of Gerhard Richter’s major retrospective at the Tate Modern this October, Daniel Blau Ltd. will be housing a parallel exhibition entitled “Benjamin Katz: Gerhard Richter – Atlas Exchanged”.The result of a friendship spanning more than four decades between Richter and Katz, this selection of 80 photographs is taken from the photographer’s vintage archive and includes portraits taken from the 1980s onwards at a variety of locations, including Richter in his studio.

Not confined to the canvas, Richter’s dialogue with photography, prints, and other media present an unequivocal insight into the post-war artist finding his subject matter through whichever media is at hand. The importance of Richter’s body of work “Atlas” is now well documented; serving to highlight the artist’s life’s work and processes through a spiraling amalgamation of imagery culled from his archive. In direct relation to this, we present Katz’s consistent documentation of the spirit of Richter living amongst his work: Katz fashions his photographs in such a way as not to intrude, but, rather to be part of an exchange of ideas found deep within Richter’s sprawling oeuvre.

During the Kunstwochenende (Munich Art Weekend) Daniel Blau will be showing the works of British artist Rachel Kneebone. In her first solo show in Germany, Kneebone will exhibit a group of finely detailed porcelain sculptures. These objects grapple with themes of sexuality and death, drawing the viewer into a dark yet humorous world. Taking influence from such things as Dante’s Divine Comedy, William Blake’s The Primaeval Giants Sunk in the Soil (1824–1827) and Ovid’s Metamorphosis, these often phallic, grotesque yet enigmatic sculptures are riddled with a shiny, contorted tale of beauty at its point closest to sex and death.

Kneebone was born in 1973 in Oxfordshire and graduated from the renowned Royal College of Art in London in 2004. In 2005 she was nominated for the MaxMara Art Prize for Women, and that same year, Mario Testino invited her to create a wall sculpture for his show, Diana, Princess of Wales, at Kensington Palace. In 2010 she was awarded the audience prize at the 11th Sculpture Triennial in Felbach. Kneebone lives and works in London.

“They are moving because of their phantom condition; every act they execute may be their last; there is not a face that is not on the verge of dissolving like a face in a dream.”
Jorge Luis Borges

We are pleased to present a unique set of images that embody a theme particularly relevant to current artistic and cultural practice: that of the haunted, the blurred and the dissolved. To exemplify these themes this exhibition will feature vintage prints as well as more recent explorations in photography and its often-dissolute processes. In homage to the alchemy and chemistry of photography, this show will illustrate fire, smoke, the spirit, the x-ray, blur and motion, decay and the photogram. Like a series of dark objects and entities trapped behind the framing of glass, the gallery space becomes a chapel to the haunted history of the photographic medium.

Daniel Blau Ltd. is pleased to present Neal Fox’s latest project Beware of the God. Fox’s drawings depict a phantasmagoric journey through the detritus and mythology of pop culture. From a life-long obsession with the tales of his dead grandfather, a World War II bomber pilot, writer and hell raiser, his large-scale drawings have developed into increasingly layered celebrations of the debauched and iconoclastic characters whose ideas have helped shape our collective consciousness.

Fox’s latest project takes many of the recurring subjects of his drawings and portrays them through the medium of the stained glass window. As traditional church windows show the iconography of saints, through representations of events in their lives, instruments of martyrdom and iconic motifs, Fox plays with the symbolism of each character’s cult of personality; Albert Hoffman takes a psychedelic bicycle ride above the LSD molecule, J G Ballard dissects the world, surrounded by 20th Century imagery and the eroticism of the car crash, and Johnny Cash holds his inner demon in chains after a religious experience in Nickerjack cave. One quality in particular binds these characters and the others together; a refusal to conform and conviction in their own ideology.

Working with traditional methods at the renowned Franz Mayer of Munich manufacturer, Fox is producing a set of twelve 2.5 metre high stained-glass windows; exhibited in a single room – an alternative church of alternative saints.

Parallel to his retrospective at Haus der Kunst, Munich, the American artist Matt Mullican will be showing at Galerie Daniel Blau.

The works of Mullican, born in 1951 in Santa Monica, California, hang in the most important collections and museums around the world; among them the Museum of Modern Art; the Whitney Museum, New York; LACMA, Los Angeles; Centre Pompidou, Paris; the Museum Ludwig, Cologne and the Tate Modern, London.

We will be showing a selection of pieces created between 1970 and 2011, taken from previous gallery exhibitions Mullican has had over the years with Daniel Blau. Central to this exhibition will be five large stained-glass windows, made by the artist at the Mayer’sche Hofkunstanstalt in Munich in 2010 and shown here for the first time.

On the occasion of Munich Highlights, Galerie Daniel Blau is presenting unique photographs by the artist Adam Fuss, who was born in Londonin 1961 and now lives in New York. The works have never been shown before. The art of Adam Fuss fetches record prices at auctions and he is represented at galleries of international renown, making him one of the top stars of the photography scene. We are particularly proud tohave the privilege of presenting these works to the public for the first time in Munich.

His early large-format series Proto Spirals focuses on circles and spirals. Foreground and background seem to dissolve as the individual circles superimpose, the separate forms coalescing and disengaging again, timeless but without appearing motionless. At the same time, they seem so light and filigree that they could break at any moment.

The direct positives are made by simple exposure in a dark room: a small, freely hanging lamp is set in motion, swinging like a pendulum on a string and directly drawing its path onto the photographic paper beneath. Gravity causes the concentric oscillations to become smaller and smaller, appearing as spirals after developing. 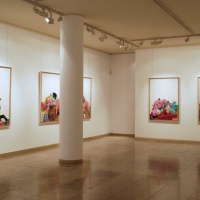 Galerie Daniel Blau is very proud to present rare paintings from the 1960’s and 70’s by Berlin artist Christa Dichgans.

When Christa Dichgans made her first solo show at Berlin’s famous gallery Springer in 1972 she already completed two scholarships, one in New York (DAAD), the other in Villa Romana in Florence.

It is these paintings made in New York and Florence that our exhibition focuses on.

Daniel Blau Gallery is pleased to announce its second opening with young London arist Neal Fox, titled 2000 Light-Years from Home, on the 10th of September 2009.

A shining entity in London’s artistic and bohemian underground, Neal Fox uses his vivid imagination and masterly drawingskills to take the viewer on a phantastical journey of composite hyper-realities forged from beatnik tales, cock-and-bullmythology, occultic symbolism and drunken tales of debauchery.

After last year’s exhibition “The Invisible Republic”, which included some of his largest and most spectacular ink-drawings, Neal Fox has again outdone himself for the up-coming show which will feature his largest works to-date.

A ten-metre long ink-drawing forms the centre-piece of the exhibition and takes the viewer on a seemingly never-ending journey into the surreal world that surrounds Joseph Conrad’s Heart of Darkness.