Rarely have photographers’ careers been as celebrated and honored as Weegee’s. Equally illustrious and renowned as his pictures was Weegee‘s persona, which heralded him as the world’s most famous photographer. For most of his early career Weegee was unrelenting in capturing New York’s seemingly endless affairs. From the grandiose halls of the Metropolitan Opera House to the unsophisticated sanctuary of Sammy’s Bar, the congregation of inquisitive spectators to the abrupt silence of a gangland murder, Weegee navigated the labyrinth of New York’s streets, documenting its untold life.

For an intense decade between 1935 and 1946, Weegee was one of the most relentlessly inventive figures in American photography. Renowned for his ability to be at the scene before anyone else, he dominated the New York landscape. In his own mind, he was the only individual, a cigar wielding visual narrator, who could tell the story of this restless city.

In late 2012, Ryan Adams, a photojournalist expert, discovered the archive in a Midwest storage facility where it had been housed since its purchase in 1994. The following collaboration with Daniel Blau has resulted not only in the current presentation of vintage Weegee prints but also in the 2015 exhibition of early works by Margaret Bourke-White and the recent museum exhibition: Robert Capa – Kriegsfotografien 1943-1945 at the Kupferstich-Kabinett Dresden. Many of the photographs were exhibited for the first time, or first recognized as works by these famous photographs.

Our researches even brought forward that Weegee was already working as a photographer in 1925. Finally Weegee’s photographs get the attention and fame they deserve in history of photography.

2013
Weegee: Murder Is My Business, Brian Wallis and Philomena Mariani 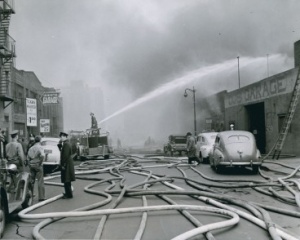