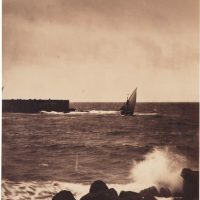 A special exhibition at the rooms of C.G. Boerner in NY

As Picasso was the central star for painting and Man Ray for modern photography, Gustave Le Gray was the prominent figure early 19th Century photographers had to conquer before they could make a name for themselves.

Like many of his colleagues, Le Gray was a painter before he enthusiastically embraced the new medium of photography. By 1849 he had entered the Paris photo scene with his calotype landscapes taken in Fontainebleau and from there found further influence teaching photography to a group of students including Du Camp, Le Secq, Mestral and Tournachon, who in turn would also go on to achieve great fame in photography.

His ground breaking inventions rapidly set new standards for size and quality. In 1857, his Vague Brisée, a “snap-shot” of a small boat with wind-filled sails and a breaking wave in the foreground, was shown to an approving and fascinated audience.

As a technical perfectionist, Le Gray was above all a great painter with the camera.

In addition to the excellent Vague Brisée three new discoveries will be shown, calotypes taken at Fontainebleau castle. Rare treasures from the estate of his colleague Le Secq, they appear to be the only surviving examples of these images.

We are thrilled to present these works to our American audience and consider our gallery very fortunate to reintroduce these pictures to the œuvre of Le Gray. 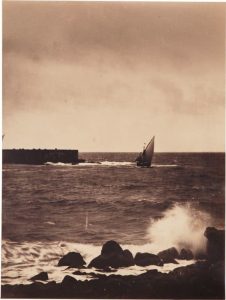