“Night and day, he prowled the streets and tall buildings of Manhattan…”
Wanda Rickerby

Daniel Blau is delighted to present an exhibition of vintage prints by renowned American photographer Arthur B. Rickerby (1921 – 1972). Best known for his depictions of New York life and organised sport, Rickerby also covered World War II events in the Pacific under Edward Steichen.

A native New Yorker, he photographed the city all his life – as a United Press employee, a freelancer, and later as one of the prestigious LIFE magazine staff photographers. The variety of subjects he covered is remarkable, from street scenes to union strikes, to President Kennedy and happenings abroad.

This is the first time that these rare vintage prints will be shown in a solo exhibition in Europe, representing the discovery of a historically important photographer who bore witness to many of the great events of the Twentieth Century.

Arthur Burroughs Rickerby was born in New York City in 1921. He began his photographic career while a student at Duke University (Durham, North Carolina), where he documented the campus sports to sell his images to local newspapers. Acme Newspictures (now UPI) noticed him and offered him a job in New York after his graduation. As this coincided with the Second World War, however, he was sent to the Pacific to cover the events under Edward Steichen.

Upon the end of the war, he returned to his job as a photojournalist in New York, recording every aspect of the city and always testing new photographic equipment, such as 35 mm film. He was nominated for a Pulitzer prize for his leadership in the world of news photography. He left United Press to become a freelancer, and as he became better known, was hired by the prestigious LIFE Magazine, with which he shot exclusive stories about president Kennedy. He continued photographing a wide variety of subjects throughout his life. 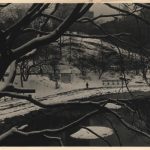