Photographs from the 1869/70 Polynesian excursion of the French Navy Commander, Paul-Émile Miot (1827-1900). When the French Navy Commander Paul Émile Miot was sent to Oceania on the "Astrée" in 1869, he took his camera equipment along, as he had on his previous expeditions including the one to Newfoundland. The photographs taken on the Polynesian journey and published for the first time in this illustrated volume are amongst the first photographic records of the South Sea people.The distinctive, complex compositions and the fond eye with which he stages the portraits, make his photographs rare historical documents. Miot’s photographs are neither an artist’s "snapshots” of exotic scenery nor a journalist’s academic documentation of a foreign place. With his photographs, he seems to have captured the essence of a paradise, the last paradise as the 19th Century Western World imagined it to be. His formal portraits of the Tahitians are iconic likenesses from an era of transition from painting to photography. In remote Polynesia, this development took place 30 years later than in Northern America and Europe. Details:
Photographs by Paul-Émile Miot”
Hardcover, 161 pages, 109 images, 30 x 25cm
Text by Sydney Picasso; ed. by Daniel Blau
ISBN: 978-3-00-025303-4 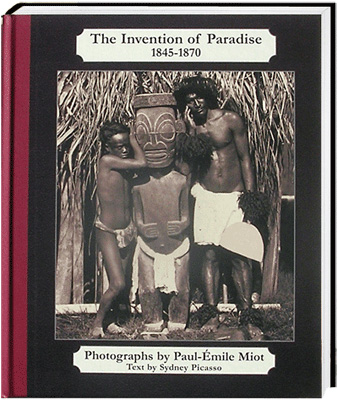