Weegee’s unstoppable energy and photographic mastery grants him his prominent position in both artistic photography as well as in photojournalism. His famous use of a flashgun created what he termed “Rembrandt lighting” – a highly contrasted chiaroscuro effect which simultaneously heightened and accentuated visual details,rendering crime scenes less gruesome whilst maintaining photojournalistic standards for print. Weegee’s visions are unique: often showing nocturnal scenery. His varied themes have inspired generations of photographers. Whether visiting a gala event or racing to a crime scene, Weegee’s interest was often directed at onlookers’ reactions rather than at the spectacle itself. His pictures highlight the sensationalist and voyeuristic elements inherent in photography.

We are particularly pleased to reaffirm Weegee’s ongoing relevance as a creative force in this ensemble of vintage prints from the 1930s and 40s that we are presenting at Paris Photo this year.

On March 18th, 1965, the Russian cosmonaut Alexey Leonov was the first human to step out of a spaceship during the Voshkod II mission. His 12 minute space walk marked a new level in the already heated competition between the Soviet Union and the United States. It was only a few months later on June 3rd, that Ed White made his space walk debut. This initiated the photographic narratives of the space race between the two superpowers. The camera has always been a silent partner in space. Photography, constantly redefining itself and our perceptions of reality, has played a decisive role in conveying the magnitude of mankind’s achievements. These pictures continue to impact our cultural, spiritual and political understanding of our environment and universe.

At 5:30 am on July 16th, 1945, the silence of the New Mexico desert was shattered by the blast of the first nuclear test, code-named ‘Trinity’. It irrevocably changed the world, ushering in the Atomic age. The light emitted by the explosion was sufficient to cause temporary blindness to an observer just half a mile away. Daniel Blau’s focus at this year’s Paris Photo is directed towards photographs of American nuclear tests from the 1940s and 50s.

Life Is Not a Test shows a unique selection of rare vintage prints of test explosions in the Pacific as well as the Nevada desert. These spectacular photographs reveal man’s most destructive forces at work and point to the fusion of art, history and technology caused by collisions of political and ideological differences. These photographs stand as a testimony to the history behind the study of the atom, which began centuries ago with philosophers investigating the structure of matter. It was the Greek philosopher Democritus (ca. 460 – 370 BC) who first formulated a hypothesis on the existence of atoms. The intersections between aesthetics, science and philosophy are dramatically demonstrated in these photographs of atomic explosions. 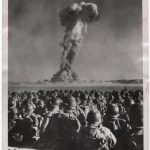 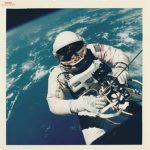 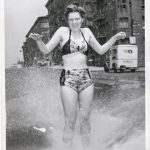 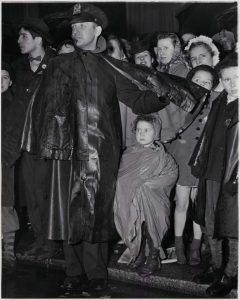