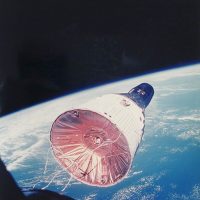 Daniel Blau is pleased to present a unique collection of rare vintage NASA photographs. These incredible pictures depict the wonder and awe of space travel.

These photographs have become part of our collective visual memory for the twentieth century; pictures that markedly symbolise the speed and power of post-war technological development at a time when Cold War tension was rife between the US and Russia. And so began the space race; the period of the 1960’s that saw the first man on the Moon. Missile technology, taken from Germany at the close of  WWII, set the technological precedence for manned space crafts to orbit the Earth, eventually landing on lunar soil: a period in human history incomparable to any other; photographed, with immense beauty, for the whole world to gaze in astound.

These are not simple snap-shots by an amateur, taken with a Kodak box, but the result of the combined efforts of thousands of workers and scientists at NASA. Indeed, these are the most expensive photographs ever produced. To see these prints in the flesh is an experience as close to bouncing on lunar soil as any of us will ever get. These magnificent landscapes can be compared to Gustav Le Gray’s large prints of  Fontainebleau or his seascapes. Today we treasure these vintage prints for their artistic quality and as permanent visual evidence of a time when the future seemed so close…

‘…Our first shock comes as we stop our spinning motion and swing ourselves around so as to bring the Moon into view. We have not been able to see the Moon for nearly a day now, and the change is electrifying. The Moon I have known all my life, that two-dimensional small yellow disk in the sky, has gone away somewhere, to be replaced by the most awesome sphere I have ever seen. To begin with, it is huge, completely filling our window. Second, it is three-dimensional. The belly of it bulges out toward us in such a pronounced fashion that I almost feel I can reach to touch it…’

A newspaper catalogue will accompany the exhibition. 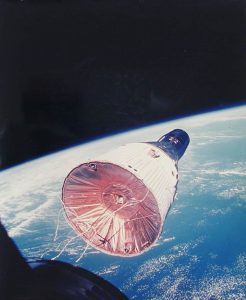