Daniel Blau is pleased to present an exhibition of affordable vintage 20th century American photojournalism. From traditional Americana – classic iconography including flags and road imagery – to gritty visions of the realities of mid-century American culture, “Happy-Go-Lucky” explores the complex history of America in the 1900s.

Post-war America was a place of euphoric positivity and untamable determination, fueled by winning World War II, reaching the moon and taming the atom. Despite this, the American Dream – the notion that all people are entitled to “Life, Liberty and the pursuit of Happiness” – remained a distant dream as it was punctured time and time again by war, economic instability and civil rebellion. The show incorporates photographs of life in inner-city Chicago housing projects, scenes of social unrest and defunct industry, fish-eye views of Manhattan and reportage that captures the zeitgeist of the era.

Many of these original photographs are press prints, which often carry ink stamps and news clippings on the back and touch-ups or crop marks on the front, adding to their historical significance. This exhibition presents a new way of looking at and collecting 20th Century American pictures. 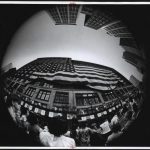