Jean-Baptiste Gustave Le Gray (1820-1884) is regarded as one of the most important French photographers of the 19th century. He was born in 1820 near Paris and originally trained there as a painter before taking up photography in the late 1840s. His earliest known daguerreotypes were made in 1847.

Le Gray is well known for his technical innovations and distinctive photographs as well as for his teaching of other notable photographers. His architectural, landscape and portrait photographs were influential and he was an important contributor to the development of the wax paper negative. In the 1850s the photographer started using collodion-on-glass negatives in preference to paper negatives in order to achieve increased sharpness of the image
and faster exposure times.

His students included Charles Nègre, Henri Le Secq, Nadar, Olympe Aguado, and Maxime Du Camp. In 1851, he became one of the first five photographers hired for the Missions Héliographiques to document French monuments and buildings. Despite his success, he became bankrupt in 1860. He left his life in France for travels in Italy, before settling in Egypt where he continued to take photographs.

1998
“Beyond the Edges: An Insider’s Look at Early Photographs”, The Metropolitan Museum of Art, New York, USA 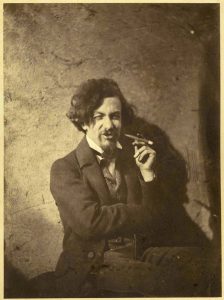