In a recent conversation I had with Billy Al Bengston, he quoted his racing buddy:
“If it only costs money, it’s cheap.” Being an avid collector myself (although not of
Contemporary Art) my interpretation of his words is: It can take a lot of effort, time
and money to track down a specific object. Sometimes it can take years and money can’t
help.

We had an exhibition of large Lüpertz paintings from 1967-70 at Art Basel in 2005.
The paintings were huge. The show looked stunning and was a great success. The
painting “Weintrauben” did not find a place in the show of tree trunks, telegraph
poles and tunnels and remained upstairs in storage to return with the other works
to Germany after the fair. But it never arrived. We only realized it had gone missing
about a year later when a loan request for the work came and we couldn’t locate it.
Now, 15 years later, a friend sends me this cryptic text message: “Dear Daniel, tell
me, are you missing a grape painting? I hope you are well. Best wishes…”
It turns out that the crate, with our label still on it, mysteriously turned up in a
private furniture warehouse in Munich. The owner of that warehouse is a friend of
our friend. I thought “Great! The grapes are back.” But then the finder emailed:
“How can I be sure you are the owner? I think I’d better go to the police.” Days
of silence followed. The painting had vanished again. Then somebody within the
city’s Lost and Found department called up. He had been referred to us by the
Lenbachhaus, and wondered if we dealt in Lüpertz. “There is this painting someone
found…”

I am sure that many of the artworks we enjoy today would have fascinating stories
to tell, if only they could speak to us in words as well as with their beauty.
I thought this lucky moment merited a presentation on the theme of flora and
color.

Karl-Heinz Schwind was our first exhibition when we opened some 30 years ago.
His works are pure energy.

Eugène Leroy, who sometimes worked for several years on a painting before
considering it finished, Don van Vliet, painter and cult musician known as Captain
Beefheart and Billy Al Bengston, known for his tropical themes and vivid colors,
are well known and do not need my introduction.

David Byrd is neither “Insider” nor “Outsider”. Having studied art after WWII
under Amédée Ozenfant, he only developed his mature style and produced his
most defining body of work after he started working as an orderly at a hospital
psychiatric ward, from 1958-88. His paintings defy any of the “Isms” we usually like
to apply to art we see; they stand apart from Pop, Realism or Expressionism.
If anything I would refer to his work as “New York Surrealism”. Byrd’s works have
an airy and somewhat aetherial quality, as if viewed through a milky glass.

C.F. Hill, on the other hand, is what one could call an “artist’s artist” – he is known
to art enthusiasts outside of his home country of Sweden who are interested
in the origins of what we call “Modern Art”. He began as an academic painter,
living for some years in France before a serious nervous breakdown brought him
back to Sweden where he was hospitalized for 5 years. He radically changed his
style and thenceforth his hallucinations and persecution mania inspired his work.
Mostly working on paper with pencil, colored pencil, charcoal or pastel, he created
mysterious landscapes reminding me of the prints done several hundred years
earlier by Hercules Seghers, landscapes out of fairy tales or nightmares.

Guerle and Nény were true self-taught artists who remained more or less in
obscurity but whose visual languages are equally inspiring and distinctive as the
better-known artists in our exhibition. They only came to my attention through
writers like Hans Prinzhorn or Dr. Jean Lacassagne, who were interested in and
propagated the artistic output of mentally insane or criminal individuals. Prinzhorn’s
Bildnerei der Geisteskranken (Berlin 1922) and Albums du Crocodile by Lacassagne
(Lyon 1939) have been rare sources of information on these fascinating artists.
D.B., 2020 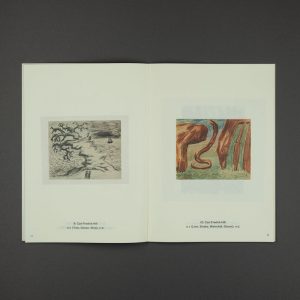 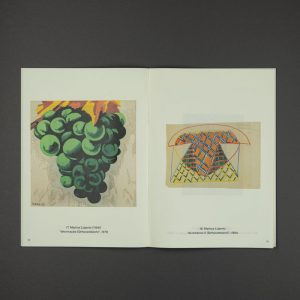 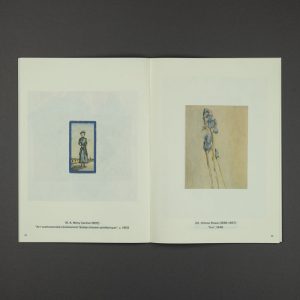 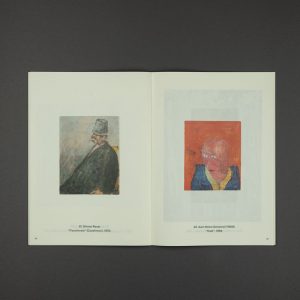