As part of our Frieze Masters 2013 exhibition, Daniel Blau Gallery will be showing four paintings from 1986 by Don Van Vliet. Best known by his stage name “Captain Beefheart”, Van Vliet garnered widespread fame and recognition throughout the 60s, 70s and 80s with his “Magic Band.” Stylistically and technically way ahead of its time, the music of Captain Beefheart and the Magic Band always exploded categorisation, whether as “psychedelic rock”,  “avantgarde pop” or “free jazz.” Beefheart’s powerful voice, with which he would bellow out the tunes, earned him an early reputation among contemporaries of the Mississippi Delta tradition, like Lightnin’ Hopkins and Taj Mahal, as one of the few white singers who could do justice to the blues.

Despite several reincarnations of his band, the vivid and colourful genius of Don Van Vliet himself perennially shone through all their performances as well as their recordings – most notably Safe as Milk, Trout Mask Replica, and Shiny Beast. Much to the frustration of his producers, Van Vliet insisted on making “2-dimensional” albums, untouched by techniques that might add perspective or depth, and would often convey new musical ideas to his bandmates figuratively. This, as well as the very illustrative nature of his lyrics, attests to the visually oriented artistic process of the man, even as a musician.

Shortly after the 1982 release of the critically acclaimed “Ice Cream for Crow” and arguably at the peak of his success, Van Vliet surprised both band and public by laying down the Captain Beefheart mantle. Music, he said, had only been an “irritant” which he had used to shake the world out of its catatonic state. Now Van Vliet wanted to channel his creative muse through his lifelong passion for drawing and painting, thus taking his vibrant animal imagery and mystical manifestations to the canvas. The resulting paintings Carp Catcher, Candle Powered Rodeo Ghosts, Garden Lion and Archaic Faces Frenzy, are glyph-like representations of hominids, beasts and spirits engaged in a primal dance that hearkens to a more raw and exuberant vision of nature underlying the man-made world one readily perceives; a vision that Don Van Vliet, a.k.a. Captain Beefheart conjures masterfully. 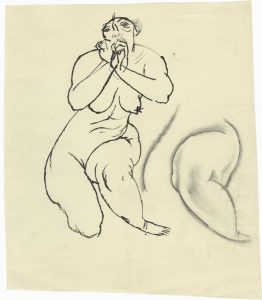