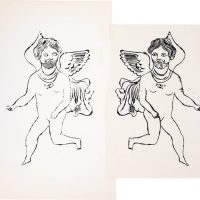 For the inaugural Frieze Masters art fair in London we will be showing the third part of our exhibition trilogy “From Silverpoint to Silver Screen”, a special one-man exhibition of Andy Warhol drawings from the 1950s.

These outstanding drawings are from the personal collection of one of the 20th century’s most significant artists, presented to the public for the first time, 50 years after their creation. We are afforded a unique and comprehensive insight into Andy Warhol’s work in the 10 years following his departure from the grey city of Pittsburgh, during the period of his artistic emancipation in New York. This is an opportunity to get to know him as the grand draftsman that he was.

Excerpt from the catalogue text by Sydney Picasso:

…
And his thirst bore him through, every image was seized, and while moments of repose produced slow and steady line drawings, time passing drove him to tracing, blotting, repro, collage; in this series we observe an impressive roster of techniques. The theme is not idleness, it is haste, an irrepressible drive to get on with it, to record and thus “live” this new life he has embraced, which will turn out to be tragically short. His “Walk on the Wild Side”: thirty odd years of total immersion, and I believe revelry, in a world he had only glimpsed before arriving on the streets of New York. “I was nobody, I came from nowhere,” he repeated. And as he was willing to literally try anything, we witness here such odd subjects as children in groups, facial studies, and the infamous child shooting up “America’s nightmare,” a mercenary drawing for a CBS series of recordings based on childhood addiction: Andy won the “prize” for art direction for this project and the image became iconified in what would become the first of his many record covers. This initiated yet another chapter in his endless forays into media, to the point that certain later images would portray the Daily News heading directly incorporated in the painting, such as in Daily News, 1962, portraying Eddie Fisher and Liz Taylor’s breakup.