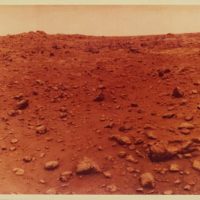 “There shall be wings! If the accomplishment be not for me, ‘tis for some other. The spirit cannot die; and man, who shall know all and shall have wings…”
Leonardo da Vinci

Daniel Blau presents an extraordinary exhibition of rare NASA photographs and photographic collages of Mars. The collages are composed of vintage silver gelatin prints and are unique works of art.

Until the Mariner 4 probe’s successful fly-by in July 1965, Mars had only been seen through terrestrial telescopes. All of a sudden photographs were transmitted to earth that were of such clarity that we could almost touch the surface of the planet. Viking 1 continued where the Mariner missions left off, and delivered wonderfully detailed photographs of this mysterious planet, named after the Roman God of War and long subject to speculations regarding the possibility of alien life.

What began as a race to put a man on the moon progressed further and further into space, spurred on by limitless ambition and curiosity. These photographs evoke an incomparable time in history when technology was developing at an incredible rate and the impossible became not only possible, but visible for the entire world to see.