Eugène Leroy (1919-2000) was introduced to the Dutch Old Masters Rembrandt and Jordaens as a teenager, and later to El Greco and Goya. From 1931 to 1932 he studied at the École des Beaux‑Arts in Lille and Paris, but he quickly decided that the methods and approaches of the academies did not correspond with his understanding of art. He moved to Roubaix, where he worked as a Latin and Greek teacher. He consistently pursued his painting during this time. In 1936 he saw “The Jewish Bride” by Rembrandt in the Amsterdam Rijksmuseum and the abstraction of materiality and the flesh were to fascinate him throughout his life. He had his first exhibition in Lille in 1937. He continued to teach during World War II. His post-war works are characterized by dark colors and have a strong connection to the North Sea. This style of painting was thematically interrupted by a crucifixion scene that he created for a chapel in Roubaix in 1946-48. In 1954 he exhibited with Sam Francis, Serge Poliakoff and Marcel Pouget. His first solo exhibition took place at the Tourcoing Museum in Dunkirk in 1956. Leroy’s move to Wasquehal in 1958 is clearly evident in his œuvre, as there is a noticeable shift in his compositions towards more abstraction. From 1955-70 he exhibited in the May Salon in Paris. Numerous exhibitions followed, and the 1988 retrospective in the Musée d’Art Moderne de la Ville de Paris deserves special mention. In 1992 he took part in the documenta IX in Kassel and in 1995 in the Venice Biennale.
Leroy died 2000 in Wasquehal. 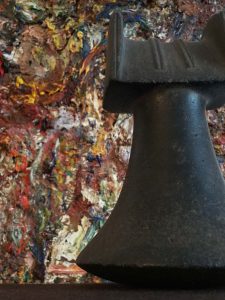