Born in Philadelphia, both sides of his family descended from late nineteenth century Lithuanian immigrants. Edward Wallowitch pursued his talent for photography early and began taking photos when he was just eleven. At the age of eighteen, he was the youngest photographer to be included in “The Family of Man”, Edward Steichen’s legendary exhibition held in 1955 at The Museum of Modern Art, meaning he was the youngest photographer ever to have prints in the Museum of Modern Art in New York. Two of them were taken with a Brownie box reflex camera while he was still at high school.

Wallowitch was a close friend of Andy Warhol in the 1950s and 60s in New York. By then he had moved from Philadelphia to Manhattan and had become an integral part of the Greenwich Village bohemia, alongside his brother John, and sister Anna Mae. Wallowitch produced a kind of poetic street photography with strong sensibility, showing a tender eye for both composition and texture. He spent a lot of his time photographing children and teenagers.

Many of Wallowitch’s pictures served as source material for Andy Warhol’s drawings. He died at the age of 48, cause of death unknown. 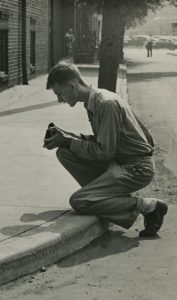