In this collection we present rare 1940s and 1950s pictures of
nuclear bomb blasts. They vary from luminous, blazing explosions and
plumes of billowing smoke to an uncannily serene pastel mushroom
cloud.

The American nuclear tests of the mid 20th century took place in
Pacific waters and the deserts of the American Southwest. The United
States is known to have conducted more than 280 atmospheric and
underwater tests, until the Limited Test Ban Treaty with the Soviet
Union sent nuclear testing underground in 1962.
All together the USA conducted over one thousand nuclear explosions
until 1992.

Most of these vintage prints hail from the collection of a former AEC
(Atomic Energy Commission) employee. These photographs were
circulated within military and scientific communities, likely only
produced and given to high-ranking military personnel or scientists
for research purposes or simply as signs of appreciation for their
involvement in the tests.

Studies of the atom began centuries ago with philosophers
investigating the structure and nature of matter. To produce nuclear
weapons, to split the atom, is to intervene in the natural order of
things – an ultimate display of power.

While the prints were originally produced as visible evidence of
scientific research and military operations, the photographs are
unsettling for their aesthetic beauty. These world-changing weapons
have left their imprint both on history and on photographic paper.
There are glowing Ansco prints on white plastic film, Kodak color prints
and dye transfer prints, made with the most modern and avant-garde
methods of the time, which paved the way for later color printing
techniques.

Alongside the radiant color pictures, there is a stunning set of large
format black and white prints of nuclear tests in Bikini Atoll. An
unknown artist made these striking works by photographing the
originals.

Within this pamphlet are vintage silver gelatin press prints of the first
atomic test, known as the Trinity test, which happened in Alamogordo
New Mexico on July 16, 1945. A press slug on the reverse of one of
the photographs refers to the ‘dawn of the atomic age’ –the blinding
light of these explosions signalled our entrance into a new era.
The race for nuclear weapons was intertwined with the space
race – with the USA and the USSR competing for technological and
ideological supremacy. The enormity and horror of what unfolded
in the nuclear attacks on Japan make these pictures particularly
disturbing. The capacity of humans to both create and destroy is
embodied in these unusual photographs 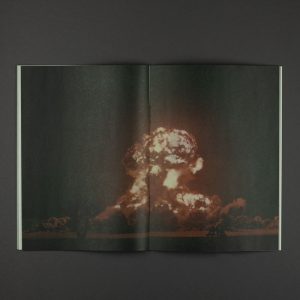 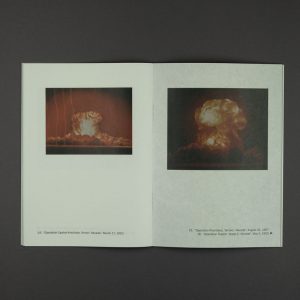 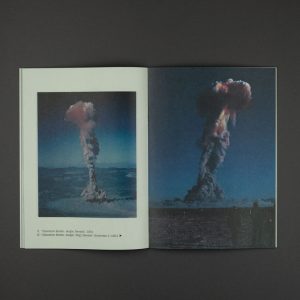 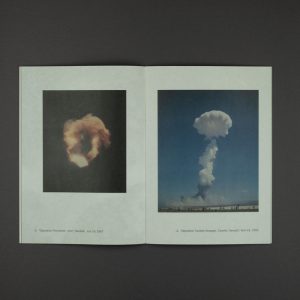 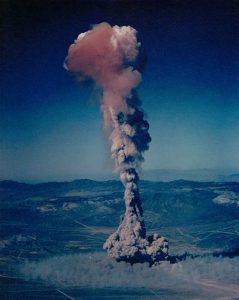