And as Warhol was a man of few words, his drawings speak: in praise and eloquence of his world, the gaudy rush of images he must have assimilated, arriving in New York from the dark and smoky depths of Pittsburgh. And what results is reactive, he just cannot draw enough. He observes, records and stages – much in the way he dresses windows, the ongoing play of life and its actors. And until he grasps the Polaroid – another direct tool of observation, the hand and the pencil work ceaselessly. And the mass of images produced by 50s and 60s glossy magazines streams by. The weeklies became a window to the world and its frenzy. As Weegee and others constantly pounded the streets at night, a whole new universe and dramatis personae emerged. High society collided with street life, and the inner workings of the big city emerged on shiny sheets, the flash bulb catching its subjects, their eyes pinned in surprise, as an animal caught in the headlights of an oncoming vehicle. This is the locale, Andy’s motif where day and night were inseparable landscapes, and endless fodder for his eager hands…

Quote from the catalogue essay by Sydney Picasso 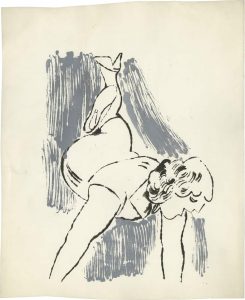