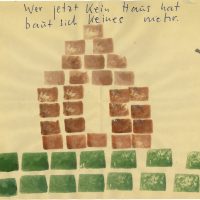 The painting career of Markus Lüpertz (b. 1941) begins with the discovery of the “Dithyramb” – a term from the poetics of the antique world, originally denoting a form of song in praise of Dionysus, God of Wine, and which has come in common parlance to describe an attitude of exuberance towards life, of a passionate ‘inspiration’ and ‘drunkenness.’ The post-war period was marked by a hesitant and even over-cautious restraint, which over time began giving way to a taste for strength and dynamic drive in art. Lüpertz’s decisive artistic disassociation from the environment around his applied arts school in Krefeld, and the beginning of the Dithyramb, belongs precisely to this moment in history. The interpretation of the Dithyramb as an architectural idea, as a house of diverse materials and parts, stems from a series of linear Dithyramb constructions in chalk dating to 1964, a series including the sheet shown here. Building blocks, shadowed all around in blue and white, form themselves into a grid, which itself is fractured and inserted into flat tiles. A new possibility begins to hint at itself, the possibility of releasing shape and form into the third dimension.

After an absence of several years, Anselm Kiefer (b. 1945) first returned to the public eye in 1973 with a series of pieces containing references from the bible, Germanic mythology, and the literary canon. These works are – as is characteristic of his entire oeuvre – inscribed with descriptions, names, and quotes.
“I view my pictures as ruins, or like building blocks, things which can be put together. They are the material with which you can build something, but they are not complete. They are closer to that which does not exist than they are to that which is completed.” – Anselm Kiefer.

The neo-Dadaist project “LIDL,” created by Jörg Immendorff (1945-2007) and Chris Reinecke, set out with the goal of bringing art and politics together in a tangible way, attempting to make alternative, artistic concepts accessible to a public outside of and with limited engagement with the prevailing currents of the world of art. In 1968 Immendorff designed a minimalistic concept for his “LIDL”-city: little houses of wood and packaging paper, within which the “LIDL”-commune would live. The “LIDL”-Academy is among the most famous actions taken as a part of the artist’s early “LIDL” period. Immendorff and some kindred spirits declared it open within the Dusseldorf Art Academy on December 2, 1968, in the wake of a row that had broken out regarding an open letter published by ten professors which accused Joseph Beuys of seeking to use the German Student Party (which he helped to found) as a tool to exert influence over the Academy’s curriculum. 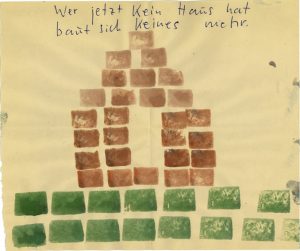