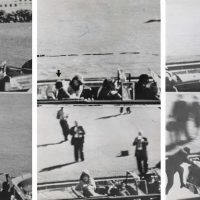 At AIPAD 2014 we are pleased to present an exhibition of photographic sequences. These vintage photographs document momentous historical events as they unfold. Viewed sequentially, they create a sense of narrative which appeals to our innate love of stories.

Our wide-ranging exhibition includes an iconic four shot sequence by William Genaust depicting his fellow U.S. Marines raising the flag on Iwo Jima in February 1945, as well as Abraham Zapruder’s famous sequence of images illustrating the assassination of President Kennedy on 22 November 1963.

The exhibition also encompasses photographs of the nuclear weapons test conducted by the U.S. as part of Operation Upshot-Knothole, which took place in the Nevada desert in 1953. In this sequence of photographs we see the devastating effects of the blast wave on a building standing in its path.

We will also show an exceptional group of photos by Sandro Aurisicchio del Val. The undeveloped films were purchased by Robert Capa from the Italian Resistance fighter in Naples and sent to the U.S. They were prominently featured in LIFE magazine at the time.