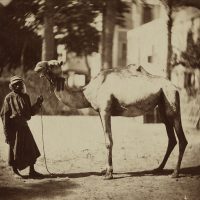 The Photographic Voyage of Francis Frith to Egypt

“Following my bent toward the romantic and perfected past, rather than to the bustling and immature present, I went East. … I would begin at the beginning of human history: I would track the Sun back to rising, and see the lands upon which his first beams fell. … It would, of course, be easy to fill my book with details of these bewitching wanderings, the memories of which are worth, to me, moutains of gold and silver.”

Francis Frith’s (1822-1898) photographic tours to Egypt in 1856-57 and 1859-60 were by far the most ambitious and systematic excursions of his time. By the time he left Liverpool for Egypt, Frith was already a recognized photographer.

His first experiments with photography are to be dated between 1851, when Frederick Scott Archer’s wet-collodion process was made generally available, and 1853, when Frith is recorded as a founding member of the Liverpool Photographic Society. Only a few years of practical photographic exercise later, he set out on his first Egyptian journey. The expedition was thoroughly planned, costly, elaborately outfitted, and conducted at a leisurley pace. Frith brought with him his stereo, the whole-plate and his mammoth-plate cameras, of which the latter was situated inside a covered vehicle which also functioned as portable darkroom and as a shelter. “We did not,” Frith wrote, “anticipate much in the way of successful results, for, as far as we were aware, we were the first to carry the process into hot countries.” At this time, the wet-plate process was still untested in desert conditions. The climate  made the photographer creative, “Many of my photographic pictures were made in tombs! to save myself the trouble of pitching my dark tent, and also for the sake of their greater coolness, I very often availed myself of a rock-tomb.”

“Notwithstanding all that I had read and imagined, I was not in the least prepared for the extraordinary and brilliant novelty of the scene that burst upon my eye on first landing in an Eastern port. … Alexandria was the greatest ‘sensation’ that I had ever experienced.”

Over the course of the group’s months-long tour, Frith photographed sites throughout Upper Egypt, including Aswan, Gebel el-Silsila, Edfu, Armant, and the Cataracts of the Nile. However, the majority of his subjects were found in the vicinity of Thebes, Luxor, and Karnak, before travel continued on to Cairo and the Great Pyramids. By then the summer season was approaching, and the climate was growing inhospitable. In July 1857, Frith returned to England, carrying with him his first set of negatives, ready for printing and exhibition.

The second voyage began that November, with Mediterranean temperatures now subsiding. Together again with the other travellers, the trip back to Cairo was made by steamship, and Frith started his photographic work anew on Islamic mosques, tombs, and Cairo street scenes. Frith probably spent the winter in Egypt before traveling to Jaffa sometime in early 1858, where the group spent more than a year. In July 1859 they “spent a summer in Cairo and its neighborhood, sweltering in an occasional heat of 108° to 110° Fahrenheit all through the night.” The new series of negatives continued with subjects like mosques, cemeteries, the Citadel, street views, flora and fauna, the pyramids, the Sphinx, the tombs at Sakkara and Dahshur, the pyramids at Giza, the stone quarries of Tura, and the Temple of Kalabsha.
With his departure for the voyage home in the early summer of 1860, Frith left behind what he considered his last “grand spell of sunshine” and readied himself for the responsibilities of marriage and business that awaited him in England. 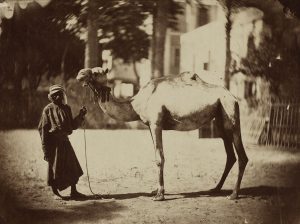 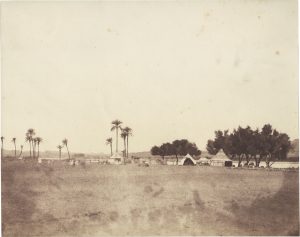 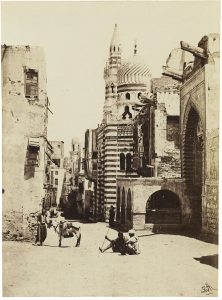