In response to the British Museum’s major exhibition “Life and Death in Pompeii and Herculaneum”, Daniel Blau is pleased to present an exhibition of original nineteenth century photographs of Pompeii alongside images documenting other archaeological sites and art and architecture in Italy.

In 79 AD Mount Vesuvius erupted, burying Pompeii and Herculaneum beneath lava and ash. The ash protected these ancient towns for centuries, to be later uncovered, yielding unparalleled insight into Roman civilisation and culture and a deepened appreciation of the art of Roman Antiquity.

Photography has further preserved Italy’s ruins, and our exhibition portrays the country’s landscapes, art and architecture as perceived in the eighteen hundreds. The photographs vary from depictions of exquisite buildings in ruins and excavated artefacts to studies of the nude female figure. 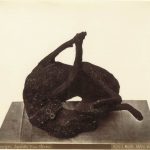