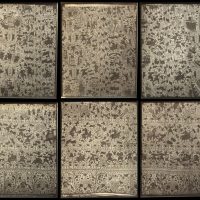 Daniel Blau is pleased to present Old Master Photographers: Photographs from the 1850’s alongside our exhibition of Andy Warhol drawings from the 1950’s. These photographers are the original masters who developed the science and the aesthetics of photography – the first to truly experiment with and push the boundaries of the medium.

Warhol’s sensual early drawings coalesce brilliantly with the images from the first decades of photography – both selections have the capacity to teach us direct lessons on what it means to create, rather than to produce, as well as portraying the genesis of artist and medium.

It’s interesting to see what has happened in the 100 years between the generation of these photographs and of Warhol’s drawings. The photograph was a revolutionary development, which caused many frustrated artists to swap their paint brushes for cameras and to utilize photography as their main artistic media.

As a new discovery we’re showing a series of photographs of a tapestry taken by the Bisson brothers for the Duke of Luynes in 1855 – 6 successive photographs arranged side by side to form a large picture of about 70 x 100 cm!