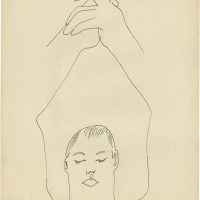 “Drawing as an exploding plastic metaphor – graphite becomes an extension of the artist’s fingers”.

Quote from the catalogue essay by Sydney Picasso.

The name “Andy Warhol” brings to mind colourful silkscreens and cans of soup: glossy, finished products arranged neatly on gallery and museum walls. However, his early drawings exhibit a profound technical ability, a draftsman’s skill that reveals a lesser-known Warhol.

We will be showing a collection of extremely rare works from the 1950’s. These are Warhol’s manual experiments with mechanical reproduction and have not seen the light of day for over 50 years. His process of tracing photographs from projected images and blotting the ink onto other pieces of paper is a rudimentary form of printmaking involving multiple stages. We are excited to exhibit these moments of metamorphosis, testaments to a period of revolution in Warhol’s life and artistic career.

Whilst the drawings produced during his first years in New York were often commercial ventures, they embody the embryonic talent so apparent in his later art. These are preliminary drawings, stills from the film of artistic progress, intentional artworks in themselves. They are playfully filled with dotted lines and occasional patches of colour which contrast with the neutral dead surfaces of his subsequent work. This treasure trove from Warhol’s personal collection gives us invaluable new insight into his first ten years as an artist in New York and represents his budding genius. From kids in Central Park to gun-wielding men and a boy shooting up, these drawings are Warhol’s artistic take on the darker side of society.