Daniel Blau is pleased to exhibit a selection of rare drawings by George Grosz (1893-1956). Taking as their subject the human form, these erotically charged and often explicit works on paper are presented to the public for the first time.

With eroticism reminiscent of Japanese shunga woodcuts, the drawings’ relationship to this Eastern print process is visible in the depictions of disproportionate human body parts. These large-format works by Grosz call to mind the grotesque yet compelling figures of Schiele, or the urgent marks of de Kooning.

Early in his career, Grosz developed his draughtsmanship by rendering the human form on paper – nudes, couples, threesomes and groups. These brazen drawings are unapologetically pornographic. Although prurient, the fine pencil lines and anatomical studies are the work of a dexterous penman. The pieces belong in the same family as works by Modern artists such as Mondrian, Kirchner and Bellmer, and bear a resemblance to the line drawings of later artists such as Warhol and Polke.

Grosz became known for his anti-war drawings and his social criticism. With his pen, pencil and palette he dissected the soul of Weimar Germany. The works on display were made in the late 1920s, before the artist’s emigration to the USA. They emerged between the two Great Wars, during a time that saw Grosz maturing as an artist as his work fluctuated between expressionistic social commentary and uninhibited libidinous fantasy. 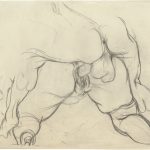 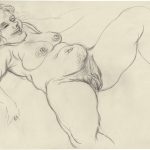