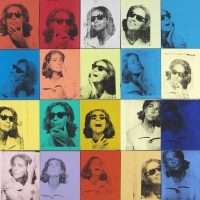 Upcoming Exhibition | Andy Warhol— From A to B and Back Again

Floor 4
Additional galleries on Floors 2 and 5

Andy Warhol at San Francisco Museum of Modern Art
Few American artists are as ever-present and instantly recognizable as Andy Warhol (1928–1987). Through his carefully cultivated persona and willingness to experiment with non-traditional art-making techniques, Warhol understood the growing power of images in contemporary life and helped to expand the role of the artist in society. This exhibition — the first Warhol retrospective organized in the U.S. since 1989 — reconsiders the work of one of the most inventive, influential, and important American artists. Beneath the glamour of Warhol’s wide-ranging creations is a deep engagement with the social issues of his time that continue to resonate today.

Stretching across three floors of SFMOMA, featuring a dozen works unique to this museum, and building on a wealth of new materials, research, and scholarship that has emerged since the artist’s untimely death in 1987, this exhibition reveals new complexities about the Warhol we think we know, and introduces a Warhol for the 21st century.

Andy Warhol—From A to B and Back Again is organized by the Whitney Museum of American Art, New York.